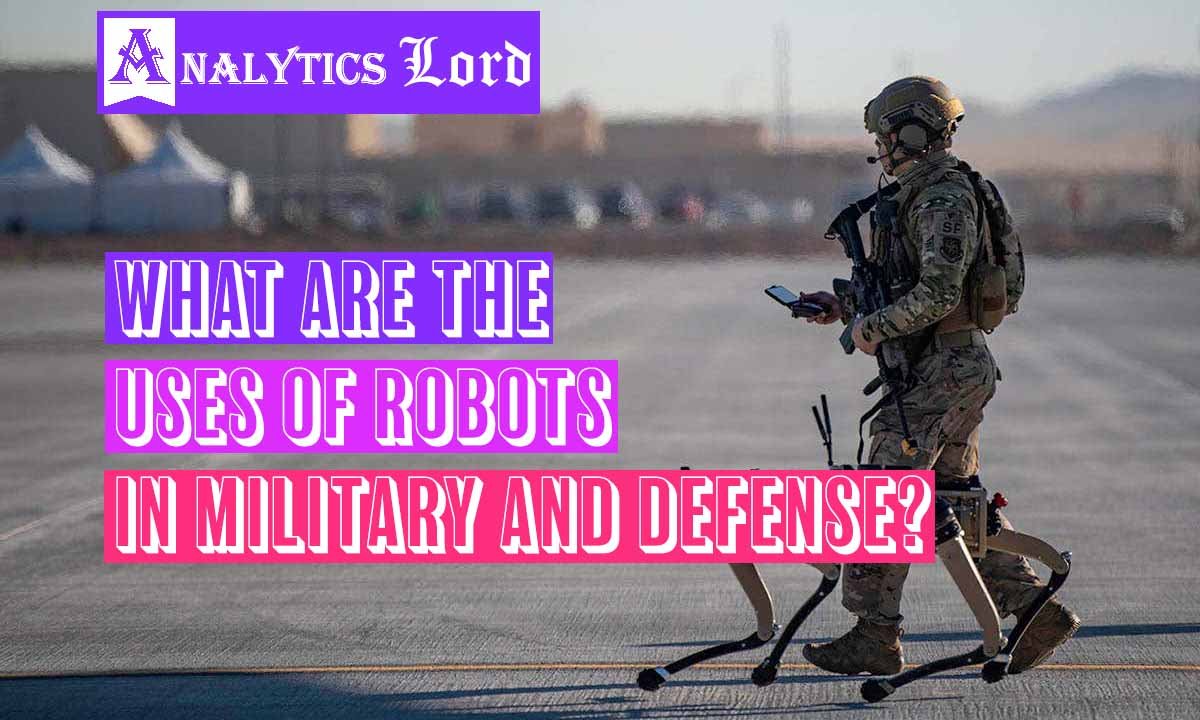 The applications of robotics have increased the intelligence of forces around the world.

With robotics becoming more and more prominent, the military & defence sector is utilizing new technologies that can save time, effort & money. In addition to this, they provide smart functionalities that make them increasingly versatile in a variety of situations. Many types of robots are key in securing the country’s safety and prosperity. Robotics helps to augment human capabilities and allow humans to safely handle potential threats like suspicious objects without harming them. Furthermore, the global military and defence robotics market have a lot of potentials for new applications that would be more beneficial. The governments are investing heavily in robotics, establishing a $30 – $33 billion market by 2022, with 12.9% annual growth. The military and defence sector uses robotics to provide human soldiers a better advantage at the ground level. Though they are heavily dependent on AI, they are controlled by human soldiers to avoid any potential dangers.

Robotics in Military and Defence

Robots are becoming increasingly popular in the military and defence. The military has been investing heavily in robotics to provide a sense of security to soldiers by taking away tasks that were previously considered to be too dangerous for humans.

Robotics also enhance soldiers’ capabilities during difficult missions and operations. This can help save the lives of both humans and robots by making them more efficient, reliable, accurate, and powerful.

Wearable Robots are well-suited to defending aspects of the military and defence industry. They help with heavyweight distribution from little-used soldiers & let them do their jobs more efficiently. The combination of artificial intelligence and robotics is a game-changer. This automation reduces the workload of human soldiers, providing necessary opportunities for them to focus on other important areas.

Mobile robots are growing increasingly popular in the military and defense industry, playing key roles such as guarding and patrolling, operating on the battlefield, and disabling bombs. Mobile robots have tons of advantages — they’re efficient, effective, and provide you with the resources you need while giving them commands through their hi-tech sensors. The robot arms are basically used to neutralize suspicious objects and bombs without harming any human soldier. They save a lot of time, energy, and effort. Let’s make the world a safer place! These offer great mobility and convenience for users. They can move freely on the land, in water and air, or travel with limited power (battery-powered). They also have excellent communication systems that make it easy to work from afar.

This industry needs an accurate & secured surveillance system to ensure your citizens the best services. Surveillance robots are used with wireless, ground-based systems to get the best vantage point, minimize the risk of danger, & leverage surveillance in order for you or your team to be better protected. The military uses infrared cameras to observe the whole building and area of their operations without risking people’s safety or encountering an incident on their own.

Robotics is a process that we are seeing more and more often within the defence industry. The use of robotic submarines, in particular, is a novel use of robotics technology. Sometimes people forget that robotic technology is awesome when they think about the things robots can do in the water. For example, they are used in multiple different types of operations including detecting and inspecting underwater mines, working on anti-submarine operations, protecting navy ships at ports, and many more. The benefits of underwater photography are tremendous, one being that it provides ample opportunities to observe underwater. Water is a type of natural resource and by preserving it we’re also conserving this valuable ecosystem from deterioration.

Searching for soldiers in emergency situations is very important for this industry. It allows faster & more effective rescue operations to save the lives of our soldiers. This is why many companies employ search & rescue teams with the necessary equipment and personnel to carry out these missions efficiently. The implementation of robotics in search and rescue has produced robots that are now able to search for, track, and rescue soldiers from different environments like chemical, nuclear, radiological, and biological. AI robots can be used to rescue people in dangerous situations while protecting them from danger. The content provided is similar to that of human beings and further enhances the overall value that AI robotics can have for businesses.

“Combat robots” are important tools for field operations. They provide crucial features such as advanced functionalities that make it easier to complete missions. Robots will be used as a combat support application. They can help with tasks like putting out fires, managing critical damage in the field, and carrying heavy backpacks on a battlefield. It’s a great tool to use for avoiding collateral damage when you’re managing massive government-backed projects. It can also be used by businesses to minimize their forced overtime hours and the associated costs.

EOD robots are easily the most popular option when it comes to designing explosive devices which can locate users, disarm them, and do other things related to explosives. This really is a clear decision. EOD robots are starting to make a big dent in the future of bomb detection. In the near future, these devices will have an important responsibility in complex missions and protect people at risk

Robotic applications come in handy by providing assistance in dangerous environments. Some of their main functions are to make humans safer from hazardous environments. Fire is one of the main hazards in the military and defence industry. Firefighting robots help to deal with these hazardous situations without risking major casualties. These vehicles are able to withstand high temperatures. They use different fire suppressing techniques that can lay down fire through smoke and help in navigating their environment.

Many expensive, powerful drones have been developed and billions of dollars are being invested in the field with more coming. The military & defence industry has much great motivation for investing in these powerful tools. These mini-drones have high battery life, advanced digital cameras, and infrared detection capabilities which will one day be standard. They’re a perfect fit for your business! Aerial views are crucial for industries to detect potential threats. By having an aerial view, you can see activities and keep the peace between people.

Voice-controlled robotic vehicles rely on artificial intelligence (AI) to carry out some of their activities, such as driving.  Now, you have full control over the speed of your machine by using motors or manually. You can send signals to these motors to accelerate or decelerate and they’ll do as much as they are told.

Robotic technology is advancing every day and is soon predicted to bring multi-fold advancements to the military and defense industry, including greater accuracy in targeting, faster response capabilities, improved intelligence analysis abilities, enhanced mobility capabilities on land and sea. Robotics can make the job of soldiers easier, especially in those situations where the danger of death is too high; and it can also get rid of bombs. The fear of loss is reduced when there is just one enemy’s life to take in battle. There are many many different uses for military robots. One of the most popular use cases is the business world. With the billion-dollar investment in robotics, you can expect that your competitors will be having a difficult time when they face your military robot on the battlefield. In terms of strategy, this simple tactic can bring some benefits to you. Advances in technology will allow for more effective procedures to keep our soldiers and civilians safe at a more manageable cost. It’s also important for government agencies as well as military contractors to be prepared for the shift from conventional processes to Advanced technologies.

10 Python Tools Every Programmer Should Learn